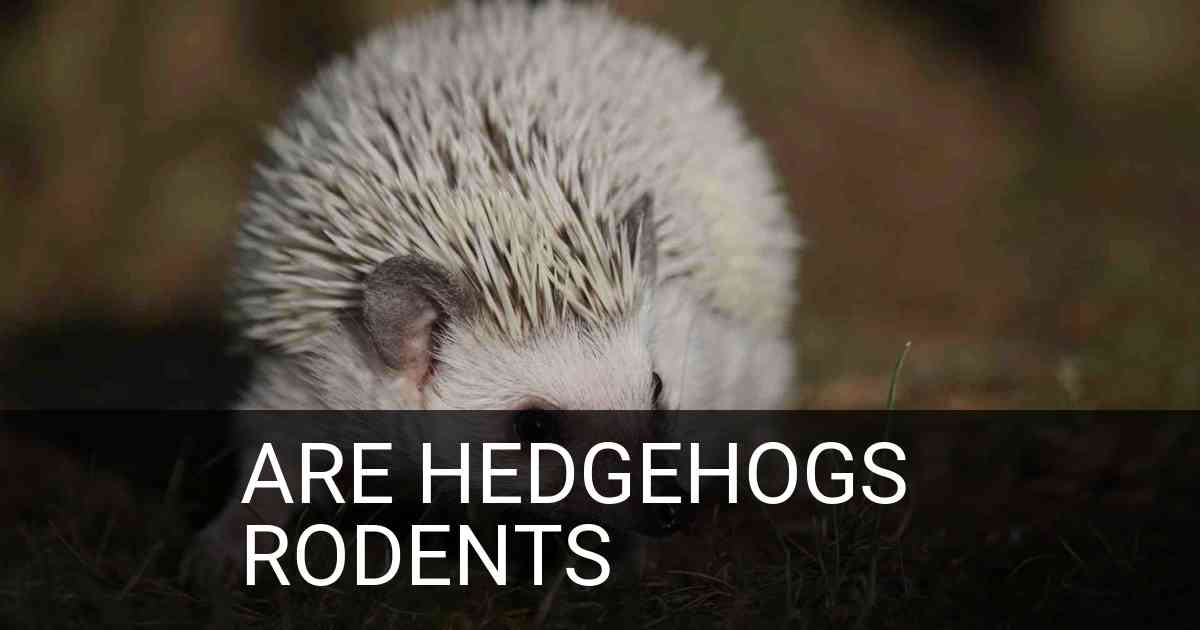 Hedgehogs have been an increasingly popular pet choice in recent years, and many people are curious about these small animals. One of the questions that comes up often is whether or not hedgehogs are considered rodents.

This article will explore this topic in detail, from examining their physical characteristics to discussing the scientific classification of hedgehogs. We’ll also answer some frequently asked questions about hedgehogs and rodents to help you better understand them. So if you’ve ever wondered “Are Hedgehogs Rodents?” then read on to find out!

The answer to this question is no, hedgehogs are not rodents. While they may share some physical traits with them, such as small size and sharp claws, there are also many differences between these two animal groups.

The Difference Between Hedgehogs and Rodents

Hedgehogs and rodents may look similar, but they are actually quite different. Knowing the distinguishing characteristics of these two animals can help you identify them when you encounter them in the wild.

Hedgehogs have a spiny coat of fur with back-facing quills that cover their bodies. They also have short legs and a pointed snout with small eyes. Rodents, on the other hand, have longer legs and larger eyes than hedgehogs. Their fur is typically softer than hedgehog’s fur, though some species do have spines or quills.

Hedgehogs are solitary animals who spend most of their time alone in self-made burrows. They mainly come out at night for foraging for food such as insects or fruits. In contrast, rodents live in social groups called colonies and tend to be more active during the day.

Are Hedgehogs Rodents or Mammals? – Investigating the Classification of These Adorable Animals

Hedgehogs are one of the most beloved small animals, and people often wonder what kind of creature they are. Are hedgehogs rodents or mammals? To answer this question, we have to look at how animals are classified in biology.

All living creatures on earth belong to the animal kingdom. This kingdom is divided into several groups (or phyla), each with its own characteristics. For example, vertebrates have a backbone while invertebrates do not.

Within these two main categories are further classifications based on specific traits that can help us determine which group a particular species belongs to.

Mammals are warm-blooded animals that give birth to live young ones instead of laying eggs. They also produce milk for their offspring through mammary glands.[2] In addition to these characteristics, they also possess hair or fur as well as three middle ear bones which allow them to hear better than other types of animals. Examples of mammals include cats, dogs, horses, bats, whales, etc.

Rodents, on the other hand, belong to a separate order called Rodentia within the mammal family. [3] They have four incisors in both upper & lower jaws with continuously growing chisel-shaped teeth. They use these teeth for gnawing food & materials. Some examples of rodents are mice, rats, hamsters, & squirrels.

Is a Hedgehog Rodent or Marsupial? Comparing the Characteristics of Each Animal

Hedgehogs are often mistaken for rodents or marsupials, but they actually belong to their own family of animals called Erinaceidae. While hedgehogs may look similar to these other animals, there are some key differences that can help you distinguish them.

Rodents are small mammals with long front incisors used for gnawing and chewing. They have short legs and bodies covered in fur. Common examples include hamsters, mice, rats, and squirrels.

Marsupials are mammals characterized by a pouch where their young develop after birth. Examples include kangaroos, opossums, koalas, and wombats.

In conclusion, hedgehogs are not rodents. While they may share some similarities with traditional rodents, such as their small size and omnivorous diet, the two animals have evolved in different ways over time. Hedgehogs possess a number of unique traits that set them apart from other small mammals and make them a distinct species all on their own. As we continue to study this fascinating creature more closely, we are sure to uncover even more evidence of why hedgehogs should be classified as their own animal group rather than just another type of rodent.